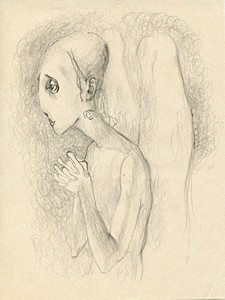 The work "Red titmouse's day", despite the apparent simplicity of the image, had a rather difficult path and the idea of its origin.

The picture, as it were, shows us two qualities of a person: good - a bird, finally fluttered out of the cage and is free! But at the same time, we see the impersonal, unhappy face of the person who released her. Sometimes, this is the second side of our essence.

But that is not all. Let's return us with you several centuries ago, during the days of serfdom. The only chance for serfs to officially get freedom from the owner at that time was "St. George's Day", November 26. The day when a peasant who settled on Moscow’s land and concluded a "decent" peasant with the owner had the right to leave the owner, having fulfilled all his obligations to him. This was the only time of the year when dependent peasants could move from one owner to another. Fly away, in fact, like a bird from its owner, with his permission.

The sketch and image of a man initially looked like an angel girl. The sketch of the picture lacked the image of the duality of human qualities, of our own angels and demons.